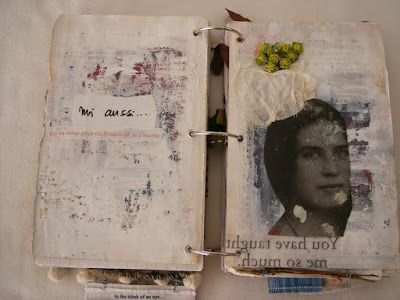 The first title that pop out was “missing you” so while drinking my coffee(just wake up…I love the jet lag!) I just realize how lately I’m in the mood of the past, when everything seemed possible. I believe it’s still is I tend to be a fighter “never give up” but as my 40 arrives I’m questioning a lot about what I’ve achieved so far. I met this beautiful and fun girl back in Port Towsend Amy who just quit her job after Artfest and decided to be an artist…Wow! Chapeau as we say in french. I was much impressed as I’ve been flying for 18 years now and my wildest dream would be precisely that, to have the guts to work at 50% (have only the best part of flying) and create CREATE  CREATE…  and if God allows it, conceive my daughter Sasha or boy Andrea. I told you it was wild! As one is so used to struggle a day after another the urge to just let go becomes overwhelming. I ‘m still on the edge of the cliff…still trying but with less and less strengh.The best thing that could happen is “lâcher-prise” LET GO.

Mamie would tell me just that” be able to believe that God never let us down that the best is still to come  don’t loose your FAITH”  so simple and yet very difficult to integrate.